It is really important to have some 'down time' when stuck in the house, so we will be up-dating this page with ideas of games you can play as a family. Some are taken from books; others from the internet. If you know any games that you think others may enjoy, then email them to info@swinnowprimary.com and we'll post them on this page! If you play any of the games, email a picture and we can put it on this page.

Game of the day -FIND THE TICK TOCK CROC! 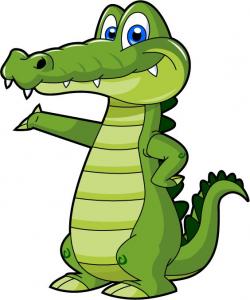 You will need: an egg timer or small alarm clock

Ask your grown up to set the 'croc' (egg timer or alarm clock) for one minute and  then find a good hiding  place for it.
Now the pirate crew (you) need to find the hidden croc by its tick, before the bell  rings!

Thanks to Mrs Bell for this game!

Game of the day - WORD ASSOCIATION

A game for 2 or more players.

The first player thinks of a word; the next player says another ord that is related to the previous word. This continues until someone says something that is completely irrelevant. 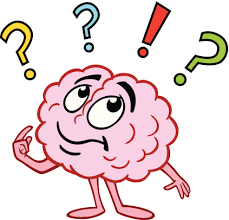 Thanks to Miss Haigh for this game!

Game of the day - FUNNY FACES

You will need: paper, pens, a die and the attached key. It’s for 2 or more players
You must roll a 1 before you can begin (as 1 is draw the head).
Take turns to roll the die and follow the instruction that corresponds with the number rolled.
The first player to draw their funny face wins. 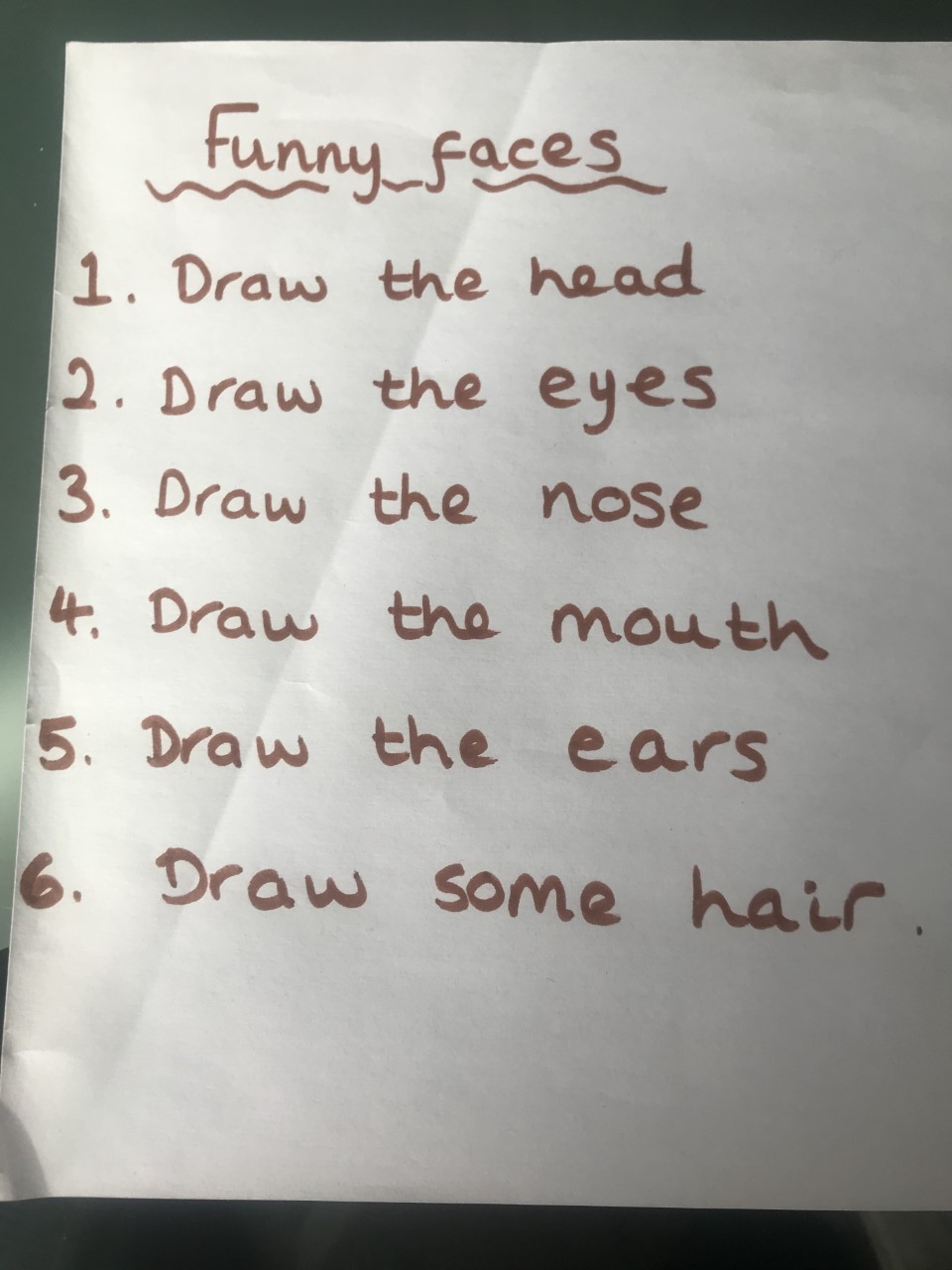 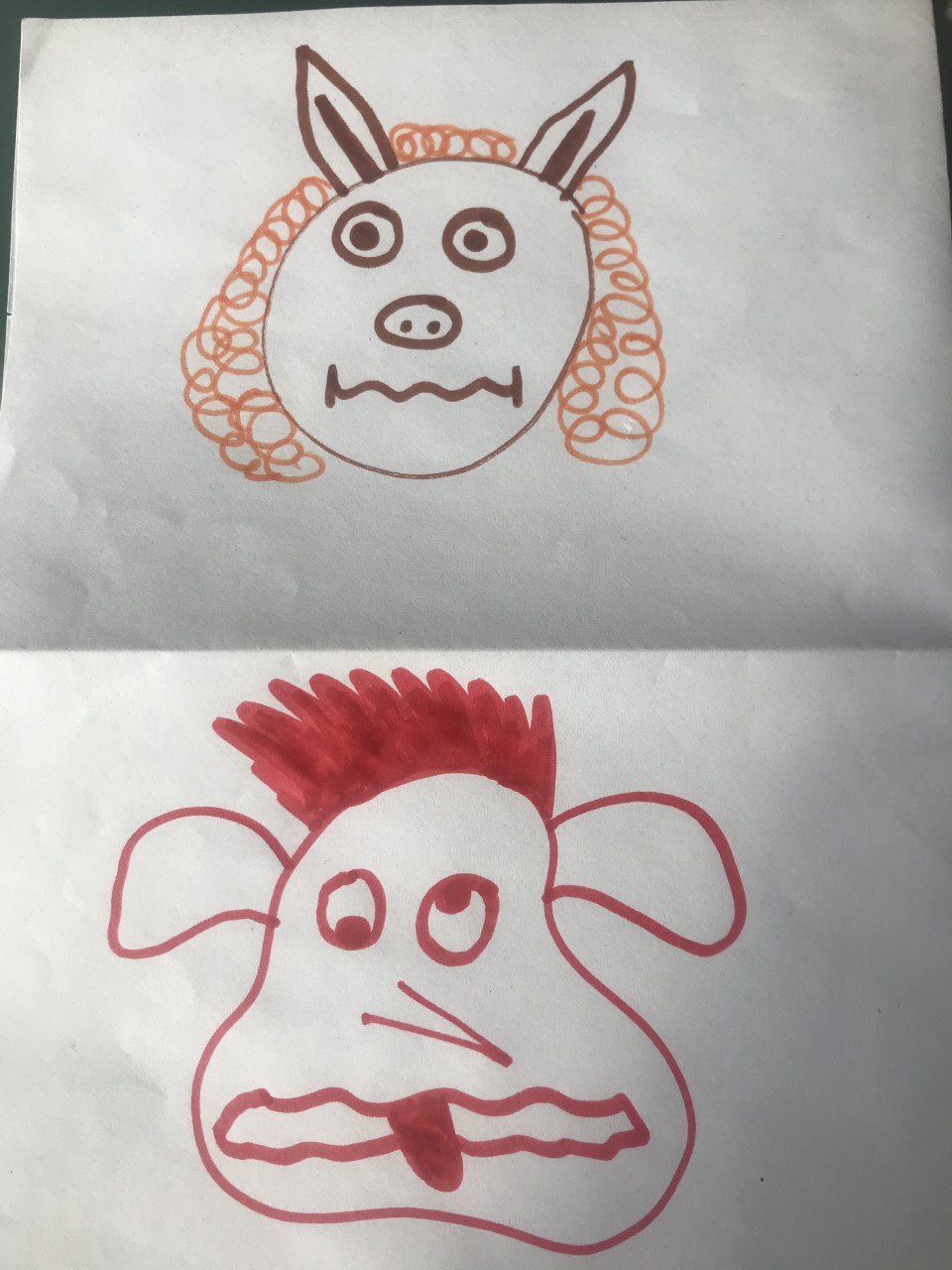 Thanks to Mrs Griffen for this game!

Game of the day - THE ALPHABET GAME

Each person in the family is competing against the others and the aim of the game is to reach the end of the alphabet. You have to collect one letter at a time from words you can see around the house. You can only move onto the next letter once you've collected the last. For example, if i wanted to collect the letter 'k' and I was in the kitchen I might see the word 'baking' on a cook book so I could collect the letter 'K' from there and then I would be able to move onto 'L'. Once a letter has been collected from a word, it's off limits to the rest of the players so I must shout out 'k! From baking' to let others know. The first person to reach 'Z' wins the game.
You could extend this game to mean you can only collect letters from words you can see from outside the window - you could look at registration plates on cars, writing on lorries and sign posts.

Thanks to Miss Stevenson for this game!

You will need: an empty shoe or cereal box; various small SAFE objects 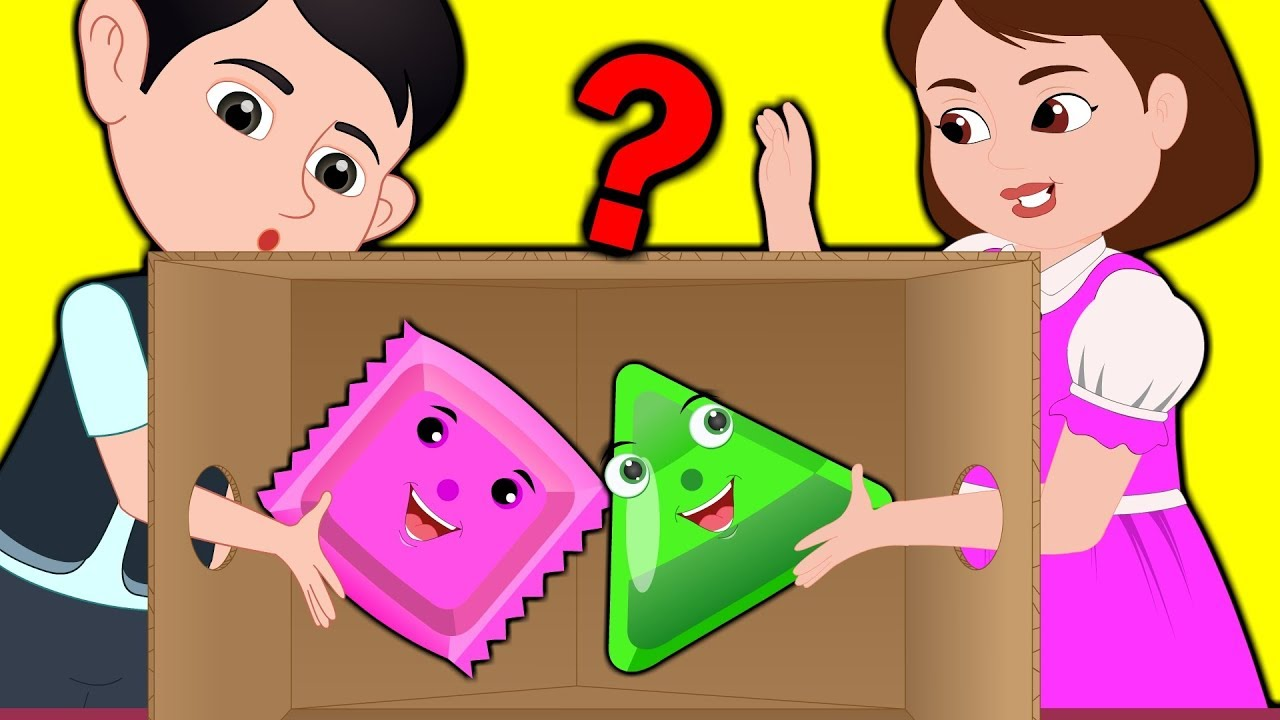 Find an empty shoe or cereal box and ask an adult to help you cut a hole in both sides big enough to fit your hands through. Put a small SAFE object in the box. Ask your friend to put their hands through the holes and try to guess what it is by feeling it. They can ask three questions, but you can only answer yes or no.
Thanks to Mrs Bell for this game!

Game of the day - PITCHING PENNIES

You will need:
A cup
pennies (real or pretend)

Place the cup on a table.
Ask the children to take a few steps away from the cup.
Toss the coins, one at a time, into the cup.
Take it in turns to see who gets the highest score.

Thanks to Miss Herfield for this game!

Game of the day - CRAZY MONSTERS!

You will need: paper and pens or pencils

Each player begins by drawing a monster head on their piece of paper. Make it as interesting and as weird as you can. This is more fun if no-one else can see what has been drawn. Then fold the paper over the head, leaving a bit of neck sticking out and pass the papers around to the player on the left. Next, each player draws a body before folding down again, remembering to leave a bit sticking out so the next player knows where to start the legs. Pass the pictures around again then add legs and feet, before folding one last time and passing on. Now it is time to unfold your masterpieces!

Thanks to Mrs Wyles for this game! 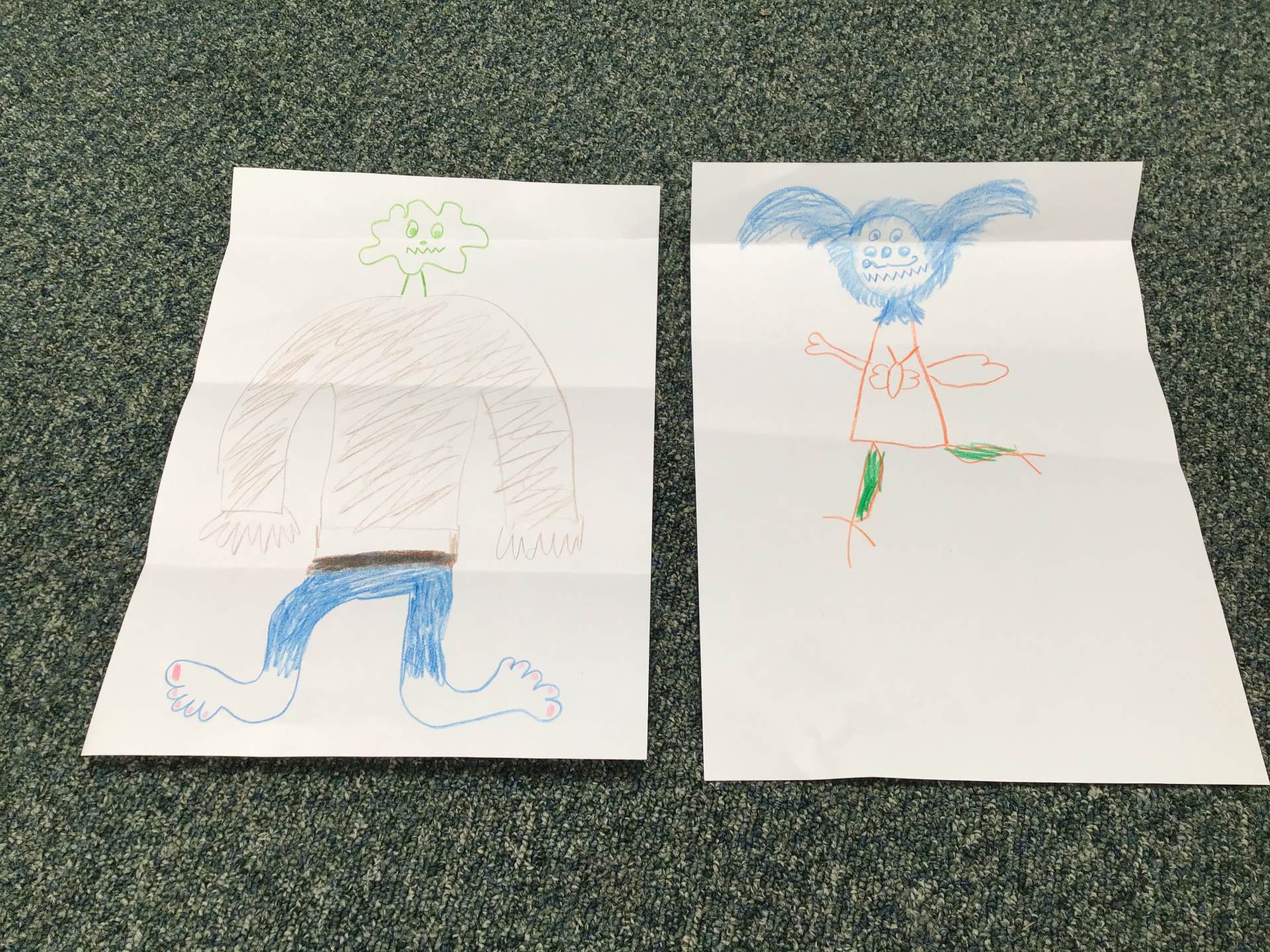 Game of the day - GUESS WHO!

You will need: post-its or scraps of paper to tape to foreheads; these should be prepared in advance. On each, write the name of a celebrity, book character or animal that the players will be able to guess.

Each player sticks a post-it on their forehead - but they must not have seen the name that is written there. All the other players can see the name. Each player then asks questions - which have a yes or no answer - to guess their celebrity or character.

Player: Am I a human? 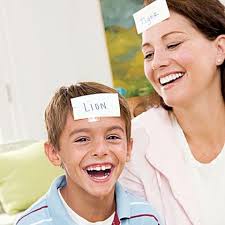 Player: Am I an animal?

Player: Are other characters scared of me?

Player: Am I the Big Bad Wolf?

(Although it might take a bit longer than that!)

You can ask each person to guess their character in turn - or allow 1 question each then go to the next player, taking it in turns.

If celebrities or book characters are too tricky, you could start with guess the animal.

Thanks to Mrs Denham for this game.

Game of the day - SNIFFER DOGS 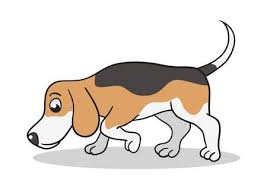 You will need: a pad of paper and a pen or pencil

One player chooses an object from the room or house and draws it on the pad.

The other players are the sniffer dogs. When they think they know what it is, they go to the object, put their 'paw' on it and bark. Everyone else comes to see. If they are correct, they are the next artist.

Game of the day - YES NO GAME

Your challenge is to get your opponents to say the words 'Yes' or 'No'. If they do, you get a point. You might ask simple questions, but keep them coming thick and fast! They are not allowed to hesitate before answering, or use phrases such as 'uh-huh' or 'nah'.

If your opponent is particularly good, then get them to speak at length about something - then throw in a quick question when they aren't expecting it. You could ask them to describe their favourite food in detail, then quickly ask if they like chips.

Game of the day - SARDINES! 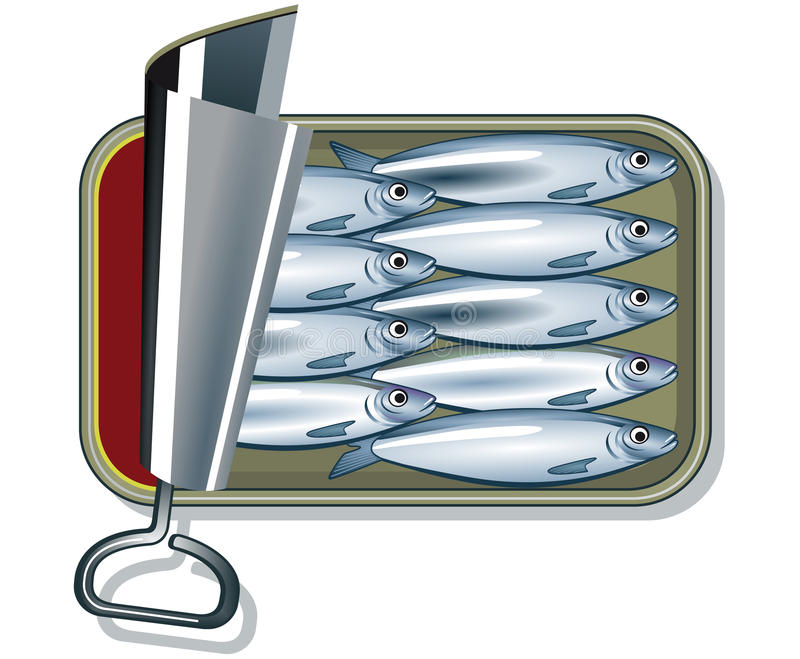 A different version of hide and seek. One person goes off to hide somewhere in the house. The other players set off, one-by-one, to find them. When the 'seekers' find the 'hider', they join them in their hiding place - also hiding from others. Eventually, most players will be squashed like sardines in a tin in the hiding place. When the last seeker finds you - you begin again.

Thanks to Maisie and Ethan Jackson for this game!